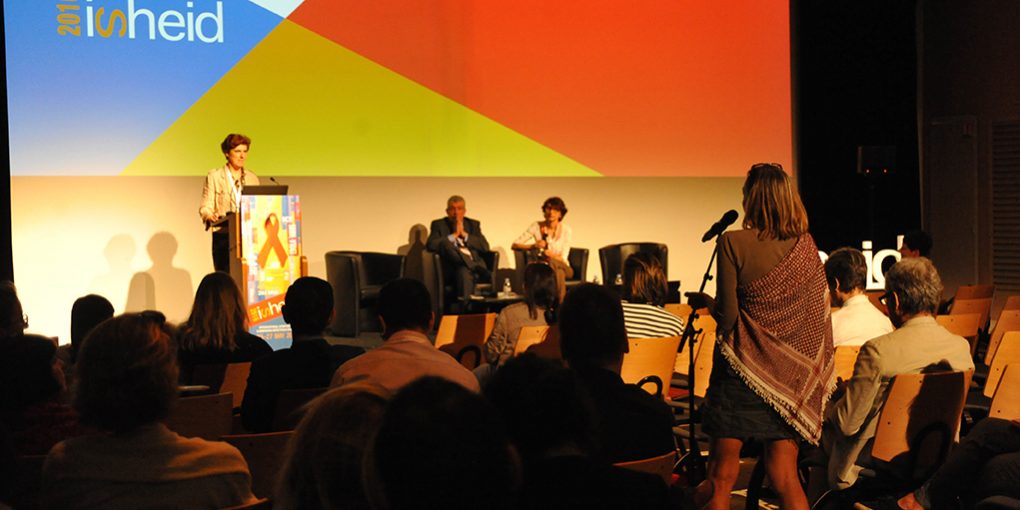 The third day of the 2016 ISHEID started with the second session on managing hepatitis viruses.

Marc Bourlière (Marseille, France) talked about treatment of HCV genotype 3 patients in 2016. This genotype is still a difficult genotype in particular in patients with cirrhosis. In Portugal only sofosbuvir/ledipasvir is available and this combination gives only 84 percent response in patients with stage 4 fibrosis. Currently the combination of sofosbuvir plus daclatasvir with ribavirin or not is used for these patients, either for 12 (96% of responses) or 24 weeks if cirrhosis is present (85% of responses). The combination of Velpatasvir with Sofosbuvir will, in a near future, give better responses. And finally, within a few years, several really pan genotypic drugs are expected.

Victor de Ledinghen (Bordeaux, France) addressed the issue of scale up for new oral hepatitis C therapies in developing countries. Worldwide there are more deaths due to HBC and HCV than TB or malaria. WHO recommends serodiagnosis in populations with high prevalence of HCV, but genotyping is not available everywhere. The same remark is done for the availability of Fibroscan. The speaker stressed that harm reduction programs are also mandatory to reduce the risk of HCV transmission in different countries worldwide. Regarding treatments, very low costs are needed. Gilead has signed agreements with 11 india-base generic manufacturers, and the generic drug companies may set up their own prices. There are also many other companies outside India that are now doing the same, allowing dramatic decreases in prices.

In the COREVIH French (HIV regional net) session Isabelle Poizot-Martin (AP-HM, Marseille, France) opened the scene talking about the French guidelines concerning PrEP. According to these guidelines PrEP should be a part of a global strategy of prevention in terms of decrease of sexual risks, early diagnosis, PEP, councelling, vaccines. Populations that are mainly concerned are MSM having a high risk social behavior (high number of partners, high number of STI, high number of PEP, chemsex), and transgender personnes. PrEP can be prescribed according to a continuous or a discontinuous schema, and the continuous PrEP is recommended in MSM populations with a high risk sexual behavior. PrEP should be prescribed after a complete physical exam and biological tests to eliminate a primary HIV infection, a chronic hepatitis B infection or a chronic kidney disease.

Patrick Philibert (European Hospital, Marseille, France) reported the experience of Marseille in terms of PrEP. Various types of patients are concerned, and 30 prescriptions of PrEP took place in the region of PACA Ouest Corse since the beginning of the temporary ministry autorisation of prescription (RTU). 25 of these patients that are followed up in the European Hospital, have a mean age of 37 years, and did not report any adverse effects of the PrEP. PrEP’s prescription should finally take into account prevalence of asymptomatic STIs, that was evaluated around 12%.

Another “hot debate” was set up between Philippe Halfon (Marseille, France) and Pablo Barreiro (Madrid, Spain) about whether anti-HCV DAA are needed whatever liver fibrosis is. This is amazing as this debate topic was chosen almost 2 years ago and the French Ministry of Health just decided universal access to DAA on last Wednesday. Pablo Barreiro mainly argued to delay treatment in genotype 3 patients for whom it is still difficult to get cure rates >90% without using interferon and ribavirin in combination to sofosbuvir.

The third part of managing HIV infection began with Daniel Kuritzkes‘ (Harvard Medial School, Boston, USA) vision of progress towards HIV cure. We currently experience a substantial reduction in AIDS-related mortality under ART and a tremendous increase in adult life expectancy in developing countries. Nevertheless, a treatment that led to durable drug-free remission or eradication (cure) of HIV-1 could reduce the burden, cost, toxicities and stigma associated with long-term ART, and might lower immune activation and the associated risk of non-AIDS clinical events. The search for a cure therefore remains a high priority for clinicians, investigators and patients. To date, only a single individual (Mr Timothy Ray Brown, known as the « Berlin » patient) has had apparent cure of HIV infection. HIV did not rebound after ART interruption and has remained undetectable during more than 7 years of follow-up. Attempts to repeat this approach in other patients have been unsuccessful to date. Current efforts at eradicating HIV infection or inducing long-term-ART-free remission include activation of HIV transcription in latently infected CD4+ T-cells (latency reversal agents, mainly Histone deacetylase inhibitors or HDACi); enhancing HIV-specific immunity in order to target and destroy cells harboring latent infectious proviruses (immune activation with TLR-7 agonists or use of anti-PD-L1 agents for instance); and cell-based therapies using genetically modified CD4+ T-cells (gene therapy) or hematopoietic stem cells transplantation. Several exploratory pilot studies are underway with each of these approaches. Major challenges include the lack of surrogate markers of cure (difficulty of quantifying the HIV reservoir for instance during the monitored ART pause or « test of cure »), the uncertain safety of the experimental treatments under study, and the need to balance the risk of these interventions against the generally well tolerated and proven efficacy of long-term ART.

Dan Barouch (Harvard Medical School, Boston, USA) talked about prospects for an HIV-1 vaccine. He has recently reported the protective efficacy of Ad26/MVA and Ad26/Env vaccines against SIVmac251 and SHIV-SF162P3 challenges in rhesus monkeys. In this case, the role of the Env gp140 protein is to boost functional antibody responses and improve protection. Thus, 50-66% of complete protection against acquisition of neutralization-resistant SIVmac251 and SHIV-SF162P3 challenges was observed (IPCAVD 001), which is superior to previously tested clinical HIV-1 vaccines. Functional antibody responses correlate with protection against acquisition of infection in rhesus monkeys.

A second series of experiments aimed at defining the intercept between antibody and virus, performing serial necropsy studies in rhesus monkeys in the model of sterilizing PGT121 protection against SHIV-SF162P3, followed by viral, immunologic and transcriptomics’ analysis. Data from this experience suggested that antibody-mediated protection could involve systemic clearance of distal virus over 7 days, going with induction of a transcriptomic signature of innate immunity and viral replication. His findings also showed that initial foci of virus seeded in distal tissues are vulnerable to eradication prior to establishment of a permanent latent reservoir.

Thierry Troussier (General Health Directorate, Paris, France) described new approaches towards STDs screening and diagnosis with the new CeGIDD model of care. The High Public Health Council (HCSP) was seized in early 2015 by the General Health Directorate (GHD) to evaluate the national plan against HIV and STIs 2010-2014 and to make recommendations on sexual health strategy and reproductive health. In reviews published in 2016 HCSP considers that sexual health support is currently fragmented among many institutions and in various plans or public health policies with no real connection between them. Health indicators are alarming, including persistence and spread of the HIV epidemic among MSM and resurgence of STIs in this population and among younger people. Based on the HCSP recommendations on sexual and reproductive health, GHD developed a national strategy for sexual and reproductive health function, information, education, training, reproductive health, prevention and screening for STIs. This new strategy is a national challenge that requires a multisectoral approach between the laws and human rights, education, society, culture, the economy and health systems.

Agnès Gautheret-Dejean (Paris Descartes University, Paris, France) presented data concerning the performance of rapid tests for the screening of HIV infection during primary infection and at the chronic stage. In order to target to end the AIDS epidemic by 2030, world health authorities have proposed three objectives for 2020: 90% of the people living with HIV should know their HIV status, 90% of the people who know their HIV status should receive treatment, and 90% of the people who receive treatment should have suppressed viral load. The diagnosis of HIV infection has thus become a priority of public health. Rapid Diagnostic Tests (RDTs) are rapid, simple, highly accessible and easy, but they also display inconvenients such as subjectivity of visual reading, technical limits (analytical performances), errors of interpretation, high price, absence of traceability, testing only HIV, false negativity during primary infection and for some strains, cross-reactivities between HIV-1 and HIV-2.

Nadget Benhaddou (Cochin Hospital, Paris, France) talked about recrudescence of syphilis in France since 2000. National surveillance network of syphilis since 2000 is based upon RésIST (Volunteer Clinicians’ network), Rénago and Rénachla (Laboratoty network), as well as Reference National Centers. The STIs surveillance data in 2014 show: patients diagnosed in Ile-de-France represent almost 30% of the national cases, they were mostly men (80%), 84% MSM, a mean age of 36 years in men and 29 years in women, 61% symptomatic, 33% were HIV-infected (3% newly diagnosed during the diagnosis of syphilis), and 75% of these last group receiving antiretroviral therapy. The systematic use of condoms during oral sex is rare (< 2% in 2014).

The last session on managing hepatitis viruses started with a presentation of Vicente Soriano (Madrid, Spain) on prospects for current hepatitis C treatment failures. Currently around 5% of patients are failing combinations of directly acting agents, more in the group with cirrhosis. There are difficult to treat populations but Dr Soriano advised to perform a wide evaluation of how urgent it is to re-treat. Take the time to avoid drug interactions, adherence problems, in a word take the time to put your patient in the best position for a new therapy. Resistance testing is a useful tool for the next regimen choice and waiting 1 or 2 years will help having many more drugs to solve almost all problems.

The session ended with a presentation from Markus Cornberg (Hannover, Germany) on the search for chronic HBV curative agents. We currently can achieve almost 100% HBV DNA suppression with drugs but not cure due to the existence of cccDNA. It is currently difficult to think eradication and the speaker preferred to hope first for a functional cure. One way is to add alpha interferon after several years of nukes. For other authors stopping nukes after several years of therapy has lead to the immune system fighting back HBV. Therapeutic vaccines are also into trials to try to get an HBV remission without drugs. As it is in HIV, combined strategies to get a functional cure will have to be studied. siRNA are another approach with the aim to give a decline in viral antigen that exhausts the immune system. Targeting the CRISP/CAS9 system could also be able to attack cccDNA. Finally new classes of DAA are coming to try to interfere with HBV.

Maryline Bonnet (IRD, Kampala, Uganda) inaugurated the last session of the 2016′ ISHEID meeting presenting last data about multidrug resistant tuberculosis (MDR-TB). MDR-TB is caused by M. tuberculosis strains that are resistant to the most potent anti-tuberculosis drugs in standard treatment, isoniazid and rifampin. Globally, incidence of TB is estimated at 3% and 20% of previously treated cases have MDR-TB, especially in China, India and the Russian Federation.MDR-TB is particularly prevalent in Eastern Europe and Central Asia, where up to 1/3 of new cases are MDR-TB.Acquired drug resistance results from poor treatment adherence, mismanagement or a specific phylogenetic lineage of M. tuberculosis, the Beijing phenotype. A rapid test XpertMTB/RIF (R) is currently available and allows simultaneous detection of M. tuberculosis and rifampicin drug resistance. In 2014, 123000 new MDR-TB patients (out of the 480000 estimated) were diagnosed and 190000 died of MDR-TB. On average 9% of MDR-TB cases have extensively drug-resistance TB (XDR-TB) defined by additional resistance to an injectable drug and a fluoroquinolone. In 2013 and 2014, two new anti-TB drugs, authorities approved bedaquilline and delamanid for the treatment of MDR-TB. The pivotal trials of these drugs added to a background regimen improved interim and long-term outcomes, but toxicities still persist. Integration of these drugs in oral MDR-TB treatments is under investigations.

The 2016 has been a true success in terms of participants, scientific level, exchanges, and ambience, we are looking forward to meet in May 2018 for new challenges…