The second day of the conference took place in the still sunny Milan, with the EACS participation competing with the Duomo and the Caravaggio exhibition.

This day’s plenary lecture first treated the future of HIV therapy. Within the frame of 29 antiretroviral drugs approved for the treatment of HIV infection in 6 mechanistic classes Roy Gullick (Cornell University, New York) described how HIV treatment is moving forward (PL3). Potent 2-drug regimens, long-acting compounds and other investigational formulations, such as implantable devices are under study, while two new mechanistic antiretroviral classes under clinical investigation are the CD4 attachment inhibitors and the HIV maturation inhibitors.

Regarding epidemiological challenges in Europe Anastasia Pharris (European Center for Disease Prevention and Control or ECDC, Sweden) presented the unchanged picture in the European Union and the European Economic Area, with 29,747 new HIV cases in 2015 (6.3 cases out of 100,000 people, vs. 6.6 in 2006)(PL4). Looking at data of cascades of care in the European region, we can notice how the different countries apply the several prevention and treatment tools available in a very different way and distinct sub-regional trends. About one in four people diagnosed with HIV in Europe and Central Asia is not receiving any treatment, therefore HIV transmission continues, especially among the key populations. She thus added that in order to reduce the number of new infections and implement a global response to HIV, Europe needs to concentrate all its efforts into three main areas: prioritizing prevention programs, facilitating the spread of HIV testing and, of course, implementing an easier access to treatment for diagnosed patients.

Carmela Pinnetti (National Institute for Infectious Diseases “Lazzaro Spallanzani” IRCCS, HIV/AIDS Unit, Rome, Italy) inaugurated the PS2 Parallel Session about Non-Infectious and Metabolic Comorbidities. She presented a cross-sectional Italian study regarding the clinical utility of CSF-NFL as a predictor of HIV-associated neurocognitive disorders (PS2/1). 101 CSF samples from 99 HIV-infected patients well characterized for neurocognitive impairment (NCI) and HAND classification were included. Their median age was 48 years (IQR, 41-53), their median current and nadir CD4 cell/mm3 were 128/uL (IQR, 49-370) and 70/uL (IQR, 28-123), respectively; only 46 patients (46%) were on ARV and plasma and CSF HIV-RNA was < 50 cp/mL in 33% and 34% of patients, respectively. CSF NFL concentrations increased with NCI worsening (unimpaired 2.84, ANI 2.85, MND 2.87, HAD 3.05 log10 pg/mL, p test for trend < 0.001) and a significant difference was detected comparing unimpaired patients with those showing HAD (p=0.001) or MND (p=0.008). At multivariable analysis higher age, a neurological disease and higher CSF NFL concentrations were associated with higher risk of neurocognitive impairment. In this context of a majority of viremic and thus patients with persistent immune activation, they concluded that CSF-NFL could be a predictor of mild and severe, but not asymptomatic HIV-associated neurocognitive disorders.

Aoife Cotter (University College Dublin, HIV Molecular Research Group, School of Medicine, Dublin, Ireland) presented results of the POPPY study regarding the contribution of HIV to reduced Bone Mineral Density (BMD) (PS2/3). 649 PLWH of a median age of 53 (51-57) years were compared to younger PLWH and HIV-negative controls regarding BMD, measured by dual Xray absorptiometry at lumbar spine (LS) and femoral neck (FN). Older PLWH had lower BMD compared to both other groups, although the difference between older and younger PLWH was greater at FN than LS and estimated differences changed only slightly after adjustment for known confounders. Among PLWH, BMD at both sites was highest in those having lower CD4 counts, in those who were viremic (HIV RNA >50 copies/ml), and in those not currently receiving ART. Therefore, the team concluded that HIV-positive status is an independent risk factor for lower BMD.

Esteban Martinez (Hospital Clínic-IDIBAPS, University of Barcelona, Barcelona, Spain) presented 48-week data of effects of switching from PIr to DTG in virologically suppressed HIV-infected patients with high cardiovascular risk on the progression of subclinical cardiovascular disease on behalf of NEAT 022 study group (PS2/6). Of 415 patients randomized in NEAT 022, 100 and 56 respectively participated in the ultrasonography and arterial stiffness sub-studies. At 48 weeks, patients who switched to DTG had lower mean progression (µm) of both right (+4 vs. +14.6) and left (-6.1 vs. +1.6) carotid common artery intima media thickness and also lower mean pulse wave velocity (-0.49 vs. -0.21 m/s) than patients who remained on PI/r. Even if these effects seemed favorable none of the differences was statistically significant.

Heiner C. Bucher (University of Basel, Basel Institute for Clinical Epidemiology & Biostatistics, Basel, Switzerland) and the Swiss HIV Cohort Study (SHCS) estimated cost of HIV-related and non-HIV related comorbidities in HIV infected individuals (PS2/7). 1196 PLWH that were representative for all SHCS patients on ART were included in order to estimate mean annual costs for the total population and for three risk groups for resource use. Ambulatory cost of ART was the major cost driver in the SHCS. Patient profiling showed that age, and comorbidities were major factors for high resource use.

The PS6 Parallel Session was about Science at the Bedside and begun with the presentation of Chiara Orlandi (University of Urbino “Carlo Bo”, Department of Biomolecular Sciences, Section of Biotechnology, Fano, Italy,) about the HIV-1 DNA as a marker to monitor reservoir in HIV-1 patients (PS6/1). Total HIV DNA, unintegrated HIV DNA, HIV-1 RNA and CD4+ count were quantified and analysed by means of Mann-Whitney, Kruskal-Wallis and Spearman correlation. Total and unintegrated HIV-DNA were correlated with HIV-1 RNA (0.20 and 0.21; p< 0.001) and CD4+ (-0.54 and -0.57; p< 0.001). A strong correlation was found between total and unintegrated HIV-DNA (0.80; p< 0.001) whereas weak correlation was found between HIV-1 RNA and CD4+ (-0.16; p=0.002). Longitudinal monitoring of total HIV-DNA assayed higher HIV-DNA in patients initiating ART compared to naïve (p=0.0304) and ART-suppressed patients. No change over time was observed in naïve or ART-suppressed, while initiating ART reduced of 80% HIV-DNA content (p=0.0078) during a median 19 (4-28) months of follow-up.

Sofie Rutsaert (HIV Cure Research Center (HCRC), Internal Medicine and Infectious Diseases, Ghent University, Ghent, Belgium) presented results of a retrospective substudy of the PROTEA trial about the use of HIV DNA as a predictive marker for virologic failure of Darunavir/r monotherapy (PS6/2). Switching from triple therapy to boosted darunavir (DRV/r) monotherapy showed a lower efficacy at week 96 in the PROTEA study but no predictive factor for virology failure could be identified. In 77 HIV-1-infected patients who were on darunavir/ritonavir 800/100 mg monotherapy for up to 96 weeks, total HIV DNA of PBMCs from peripheral blood was measured at baseline, W48 and W96. Among these patients a significant difference in log HIV DNA/106 PBMCs at baseline is observed between patients who remained undetected (2.38, 95%CI 2.21-2.55) and patient who failed monotherapy (2.78, 95%CI 2.60-2.96) or remained VL< 40copies/ml (2.69, 95%CI 2.56-2.82) (p < 0.005). There was no apparent reseeding of the viral reservoir: no significant difference in HIV DNA between baseline, week 48 and week 96 of DRV/r monotherapy. A cut-off of 2.2 log HIV DNA/106 PBMCs was identified as a possible predictive marker of successful therapy under PI-based monotherapy in clinical decision making. This cut-off would reduce the number of patients eligible for monotherapy by 66% but increasing success rate to 99%.

Annapaola Callegaro (ASST-PG23.it, Microbiology and Virology and Biobank, Bergamo, Italy) presented a cross-sectional study analyzing factors associated with total HIV-DNA levels in virologically-suppressed HIV-infected individuals (PS6/3). 185 subjects on effective cART were enrolled and had a median age of 49.4 years (IQR 42-54) with a median time on cART and current cART of 9.9 years (IQR 3-17) and 2.4 years (IQR 1-5) respectively. HIV-RNA was < 3 copies/ml in 69.7% and between 3-50 copies/ml in the remaining patients. Median HIV-DNA was 3.28 log copies/106 CD4+ (IQR 2.9-3.6). Patients with a current HIV-RNA >3 copies/ml had a HIV-DNA significantly (P=0.001) higher than patients with a current HIV-RNA < 3 copies/ml. In univariate analysis, HIV-DNA level significantly correlated with CD8+ T-cell counts (P=0.029), CD4+/CD8+ ratio (P=0.001), pre-cART viral load (P=0.002), and time with viral load < 3 copies/ml (P=0.001). In multivariate analysis only CD4+/CD8+ ratio, pre-cART viral load and time with viral load < 3 copies/ml retained a statistical significance, and only the time with viral load < 3 copies/ml was significantly (P =0.036) associated to HIV-DNA content and should be implemented in clinical practice.

Anne-Geneviève Marcelin (Sorbonne Universités, UPMC Univ Paris 06, INSERM, UMR_S 1136,, Virology, Paris, France) discussed about virological factors associated with outcome of dual ETR/RAL Therapy in the ANRS-163 Trial (PS6/4). At W48, one patient experienced virological failure (VF) defined as 2 consecutive viral load (VL) >50 copies/mL, and 9 patients had a viral blip (a VL > 50 copies/mL followed by a VL < 50 copies/mL). Median HIV cell associated DNA in PBMC was similar at baseline (BL) and W48 (2.12 and 2.05 log10 copies/106 cells, respectively; p=0.15). The VF and blips were not associated with BL HIV DNA level (p=0.11). UDS was able to detect minority resistance variants at baseline on the RT gene (K103N: 9.6%; Y181C: 4.9%) only for the patient failing to the trial treatment at W48 and who accumulated resistance mutations.

The Special Session of the EACS Treatment Guidelines, version 9.0, explained that panels focused on producing more comprehensive and user friendly guidelines, as Lene Ryom (University of Copenhagen, Medical Assistant Coordinator of the EACS Guidelines) announced while introducing the session.

Anton Pozniak (Chelsea and Westminster Hospital, Chair of the HIV Treatment section) specified that recommended initial treatments took into account newer scientific evidence, as well as the preference of use based on the data available. Recommandations on use of ART in pregnant women were added, further specifying the monitoring needed in this context.

Massimo Potti (Niguarda Hospital in Milan, Chair of the Co-infections section) reminded that the eradication of HCV co-infection in PLWH is now an achievable goal, because we have to consider for treatment all co-infected persons.

Catia Marzolini (team member of the Liverpool HIV/HEP Drug Interactions website) explained that the drug-drug interactions (DDIs) section has been adapted to polymorbid individuals, further including HIV and contraceptive drugs. 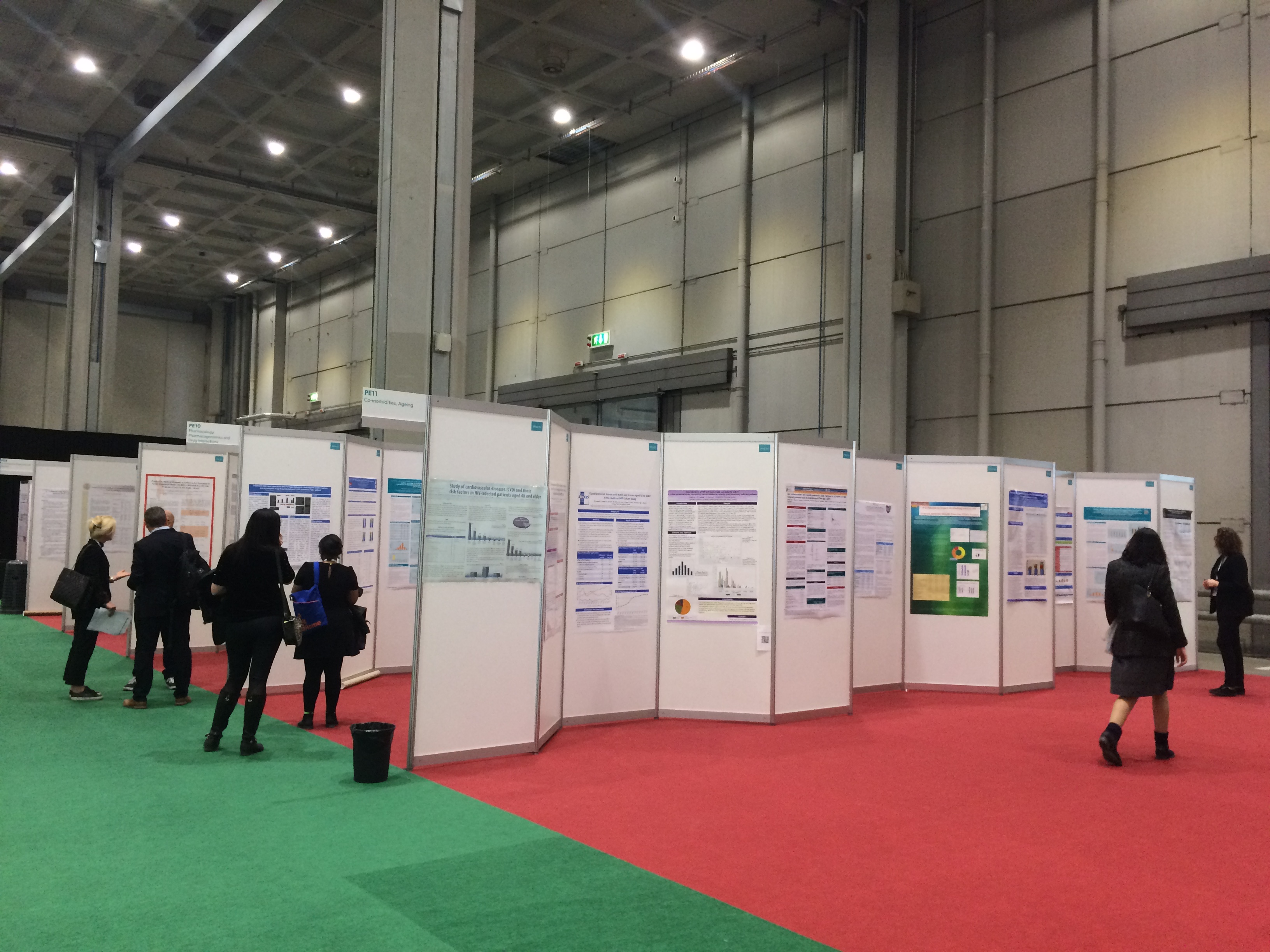