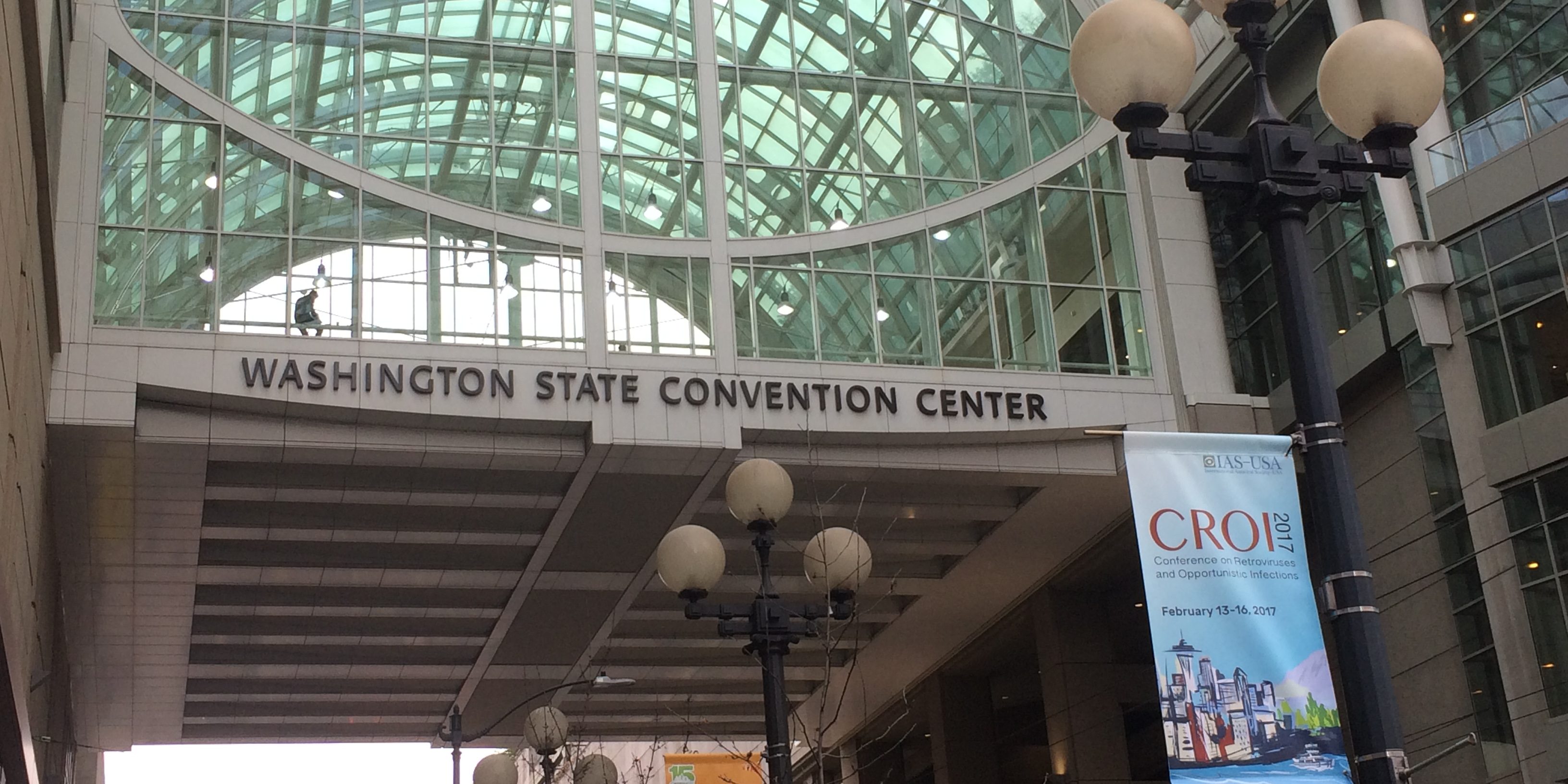 Dr Jintanat Ananworanich from Thailand (12) inaugurated the first plenary session of CROI 2017 in the overflowed auditorium of the Washington State Convention Center. From Infants to Adults the phenomena of HIV remission (the ability to control viral replication after ART interruption to levels below detection) and eradication (no replication competent virus) are rather rare and require extreme therapeutic measures. In chronic cohorts HIV plasma ARN usually rebounds following treatment interruption after a median time of 14 days. This rebound can be delayed if ART has been set up early enough (26 days after treatment interruption if ART during Fiebig I stades). HIV remission could be more favorable to achieve in infants because of the known timing of HIV exposure in most newborns, and because of a unique immune system (more resistant naive CD4 T cells, immune cells in development). HIV persists in the body indefinitely because of the maintenance of latently infected cells that are long lived through homeostatic proliferation or clonal expansion. These cells are responsible for viral load rebound following ART interruption. Tissues are reservoirs for HIV and ongoing viral replication can occur to tissues because of limited ART penetration or anatomical barriers (B cells in lymph nodes).

When we give interventions we try to reduce replication competent virus (measured by Viral Outgrowth Assay) and intact inducible virus (inducible upon repeated stimulation) that are responsible for viral rebound without ART. Therapies needed in order to limit the size of HIV reservoirs include Latency Reversing Agents and passive and active immune therapies (broadly neutralizing antibodies and therapeutic HIV vaccines). Combination therapies are more likely to generate a durable HIV control and persistent immune surveillance.

Dr Carl H. June from Philadelphia (13) did a tremendous introduction on Chimeric Antigen Receptor (CAR) T cells. These cells are genetically engineered immune cells that can be deployed against cancer or even HIV. The first gene editing in humans is the well-known Berlin patient. Thus, the emergent rationale of synthetic immunity is based on the genetic editing of immune cells in order to enhance T cell function against chronic conditions of antigen overload (cancer or chronic infections). The first “CAR” trial in refractory ALL (CART19) displays 93% of cancer remission (57/60 young adults) using cytotoxic and central memory T cells. Half-life of CAR-modified T-cells was superior to 17 years. FDA approval is anticipated in 2017 and 161 patients are currently enrolled in cancer CAR trials throughout US and China. No CAR trials in HIV are currently ongoing.

Cell therapies currently appear to be the fourth pillar of Global Healthcare, along with pharma, biotech and medical devices.

Dr Andrew Owen from Liverpool (39) presented early clinical results of solid drug nanoparticles (SDN) formulations of efavirenz (EFV) and lopinavir (LPV). These SDN may have explicit benefits for paediatric formulation thanks to the dispersal of drugs into water. This study sought to confirm preclinical potential for dose reduction of SDN formulations in healthy volunteers while maintaining pharmacokinetics. Clinical strategy included PK profile after first dose of 50 mg NANO-EFV OD or 200 mg NANO-LPV (boosted with 100 mg Norvir), as well as steady state PK after final dose on 21st or 7th day respectively, and was followed by a modeling study in order to achieve a simulated comparison with currently used formulations. Both nanoformulations proved to be well tolerated at the studied doses and while simulations confirmed the potential for a 50% dose reduction while maintaining therapeutic exposure, these data need to be confirmed in larger future studies.

Dr Joseph M. Custodio from Foster City (40) presented clinical pharmacology results of Phase 1 program of bictegravir (BIC; formerly GS-9883) as a novel, once-daily INSTI that has a high barrier to resistance. The 10-day study monotherapy demonstrated rapid decline of HIV RNA of more than 2 log. BIC is currently evaluated in Phase 2 studies in combination with emtricitabine (FTC) and tenofovir alafenamide (TAF), as well as in phase 3 development as an STR coformulated with FTC and TAF. The tolerance is good; we observe neither an effect on QT interval, nor an impact on glomerular filtration. Severe renal impairment or moderate hepatic impairment have no clinically significant effect on PK. Its PK profile of 18 hours of half-life is supportive of once daily dosing, and has a low potential for drug interactions. Dose chosen for phase 3 studies is 75 mg, reduced to 50 mg when BIC is administered in STR.

Dr Paul E. Sax from Boston (41) displayed results of a randomized, double blind, active-controlled study where naive HIV-infected adults received once-daily BIC 75 mg or DTG 50 mg, both given with FTC/TAF 200 mg/25 mg (2:1 randomization). The primary endpoint was the proportion of HIV-1 RNA < 50 copies/mL at week 24 using snapshot analysis. 98 patients were enrolled (65 under BIC+FTC/TAF and 33 under DTG + FTC/TAF), with baseline characteristics balanced between arms. Virologic success at W24 was 97% for the BIC and 94% for the DTG arm, and 97% or 91% respectively at W48. No treatment-emergent resistance was detected through W48 and no treatment-related serious adverse events were reported. Estimated GFR changes were consistent with BIC or DTG known inhibition of tubular creatinine transport. Phase 3 BIC-programs are ongoing.

Dr José L. Blanco from Barcelona (42) did an international retrospective analysis of 3 different large cohorts (Munich, Montreal, Barcelona) in order to characterize resistance-associated mutations (RAMs) in subjects failing a DTG-monotherapy 50 mg QD after switching from other therapies (REDOMO study). Virological failure (VF) was defined as two consecutive plasma viral loads (VL) above 50 copies/mL. A total of 178 ART-experienced subjects with no prior InSTI-VF were included, of whom 11 (6.7%) had VF under DTG-monotherapy and 9/11 (81%) selected any InSTI-RAMs, with a median interval between VF and RAM of 5 weeks. The time of virological induction and patient adherence do not seem to justify the DTG monotherapy failures. The pathways of RAMs included 92Q, 118R, 148X, and 155H.

Dr Anne Derache from South Africa (43) presented prevalence and impact of pretreatment drug resistance (PDR) in the ANRS 12249 TASP trial. Baseline resistance may be responsible for a delayed time to viral suppression, as well as an increased risk of VF upon ART initiation. In a recent study in Mexico the PDR level observed was 16%, with a majority of NNRTI mutations. Thus, the HR to achieve viral suppression was 0.24, if NNRTI was present (p=0,014). The ANRS TASP trial evaluated the effect of early ART (regardless of CD4 count and clinical stage) on HIV incidence in the general population in the same setting of the province of KwaZulu-Natal in South Africa. DR testing has been performed on samples from 1337 participants (Pol Gene Sanger sequencing or full HIV genome sequencing). Overall PDR prevalence was 9% in both recently and chronically infected participants. NNRTI were mostly compromised by PDR, but NRTIs were still active. Around 10% of naive participants displaying more than 3 DRM were most likely previously exposed to ART. High baseline viral load and poor adherence were the main factors associated with lower virological suppression.

Dr Josep M. Llibre from Barcelona (44LB) presented W48 results of SWORD-1 and SWORD-2 phase III studies. SWORD studies are randomized (1:1), multicenter, open-label, non-inferiority studies that evaluated the efficacy and safety of switching from a current ART to DTG+RPV once daily in virologically suppressed patients (VL<50 c/ml) in order to minimize cumulative drug exposure. 1024 patients were enrolled (DTG+RPV 513; current ART 511) across both studies. Switching to DTG+RPV was not inferior to continuing current ART at W48 in pooled analysis. Low and similar rates of VF in snapshot analysis at W48 were observed for both arms; one of patients with VF had an NNRTI RAM (K101K/E). More adverse events were reported in the DTG+RPV arm. New choices of 2 Drug Regimens may reduce cumulative ART exposure.